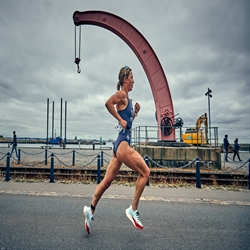 Holly Lawrence is a standout athlete in the Bahrain Endurance racing red, joining the team after her breakthrough Ironman 70.3 world championship win in 2016. A tremendous talent capable of winning all over the world, she took four Ironman 70.3 regional championships in 2019, triumphing in North America, Asia Pacific, Europe, and the Middle East.

Given Holly’s background in swimming and cross-country running, she was targeted for development in pentathlon alongside her brother. After she raced in a triathlon at age 16, however, she discovered a sport for herself. She raced on the British circuit and was a member of a French Grand Prix team while studying for her university degree. In 2014, she was invited to race on the British team for the European championships.

Holly moved up to the non-drafting 70.3 distance in 2015, which played better to her strength on the swim and bike. Her third place at Ironman 70.3 Oceanside and a second-place finish on the hilly Ironman 70.3 Mont Tremblant were indicators of her potential. She has since made good on this with a win at the 2016 Ironman 70.3 World Championships in Mooloolaba, the high point of a breakthrough year that saw her win three titles over the half distance.

Alongside teammate Alistair Brownlee, Holly took the top spot at Ironman 70.3 St. George in their first year on the team. She also capped the season with the win in a neck-and-neck race with Daniela Ryf at the Ironman 70.3 Middle East Championship, denying the Swiss of a million-dollar Triple Crown.

The Making of Holly Lawrence http://ap.ironman.com/triathlon/news/articles/2016/12/the-making-of-holly-lawrence.aspx#axzz4YAIA9VjS

The Bahrain Endurance 13 returned to their worldwide winning ways snapping up titles across three continents this past week.
News Article

Since 2015 our team has gathered in Bahrain for our annual team camp. It’s always a highlight but 2019 has to rate as our best ever!