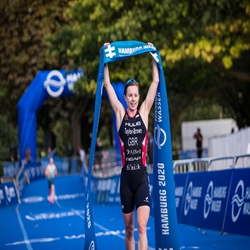 The past Olympic cycle has seen Georgia Taylor-Brown’s star rise to the pinnacle of sporting achievement: her breakout performance at the Tokyo test event, then a surprise world title in Hamburg in 2020, and finally a silver in the individual and gold in the mixed relay to become the most successful Olympic triathlete at a single Games.

Georgia started running at 12 years old and began swimming even younger at 5, encouraged by her father who represented Great Britain in the 800 meters and her mother who was a national level swimmer and club runner. Selected for the British Triathlon Olympic Development Squad, she saw early success at junior level – then battled to bounce back from injury to make the national squad.

In 2022 for her services to triathlon, Georgia was ​​appointed a Member of the Order of the British Empire (MBE).

Georgia Taylor-Brown won the first World Triathlon Championship Series race of the year in Yokohama on Saturday, putting her name on the board and rising to the top of the WTCS rankings.
News Article

Cassandre Beaugrand made a triumphant return to Super League Triathlon racing, powering to victory at the Arena Games London on Saturday.