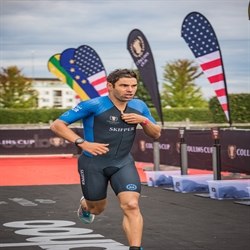 Joe Skipper is an ITU long distance world championship bronze medalist, three-time Ironman champion, and the fastest British male ironman of all time. He was the first British male to go under 8 hours in an ironman, and also holds the British 12-hour time-trial record for cycling an incredible 325.55 miles.

In 2011, Joe won the amateur British middle distance championship and turned pro. Since then he has worked hard to improve his craft and now stands among the giants of the sport on the Bahrain Endurance 13 Team.

Beaugrand and Taylor-Brown shine in Montreal

This weekend the Bahrain Endurance 13 sends off six athletes to race on three continents: North America, Europe, and Africa.