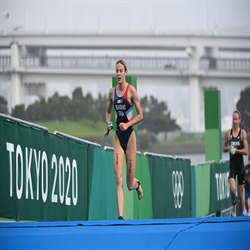 The way Cassandre Beaugrand races may look effortless, but behind that calm facade burns the heart of an absolute competitor.

In 2020 she became an Olympic bronze medalist in the mixed relay in Tokyo with team mate Vincent Luis.

While still racing as a junior, Cassandre was selected for the French Mixed Relay team which went on to win silver at the 2014 World Championships. That same year, she became junior world vice-champion and French national champion at the tender age of 17.

She has since cut her Olympic teeth in Rio, where she placed 30th. In 2018, after snatching up her first World Triathlon Series win in Hamburg she played a role in France winning their first Mixed Relay World Championship. They are favorites going into the Tokyo Olympics’ first mixed relay event after winning the test event in 2019 and defending the world championship title twice (2019, 2020).

Cassandre has also held her own in the fiercely competitive Super League Triathlon racing scene, competing across varying conditions, courses, and formats.

Georgia Taylor-Brown won the first World Triathlon Championship Series race of the year in Yokohama on Saturday, putting her name on the board and rising to the top of the WTCS rankings.
News Article

Cassandre Beaugrand made a triumphant return to Super League Triathlon racing, powering to victory at the Arena Games London on Saturday.
News Article

This weekend the Bahrain Endurance 13 sends off six athletes to race on three continents: North America, Europe, and Africa.