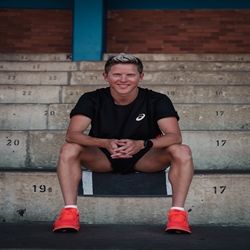 While Henri Schoeman is known as fish in the water with consistently one of the fastest triathlon swims on the circuit, he proved himself a well-rounded athlete at his medal-earning debut Olympic triathlon performance in Rio. He converted his lead-pack swim and bike effort into a bronze medal with one of the race’s fastest runs, making history as South Africa’s first triathlon Olympic medalist.

Succeeding performances showed this was no fluke; he won the World Triathlon Grand Final in Cozumel, earning his (and South Africa’s) first WTS win. As the Olympic cycle for Tokyo began, Henri ran away with the gold at the 2018 Commonwealth Games against a field that included the Rio gold and silver medalists. He has also risen as one of the top contenders in Super League Triathlon racing, consistently battling for the top spot in the rankings.

Expect Henri to show up ready to win in Tokyo.

The Bahrain Endurance 13 are back to their winning ways, taking three golds and a silver over the weekend.
News Article

Kristian Blummenfelt (NOR) claimed victory at the World Triathlon Championship Series race in Yokohama, winning in 1:42:55 over the Olympic distance. This marks his second World Triathlon series win; his first was the Grand Final in Lausanne in 2019.
News Article