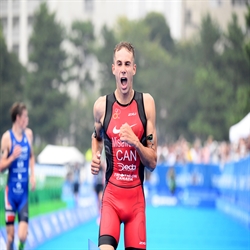 Watching Simon Whitfield win silver at the Beijing Olympic Games kicked off Tyler Mislawchuk’s dream of competing for Canada. A scant eight years later he competed in the Rio Olympics on the sport’s biggest stage, finishing in 15th place on his first appearance.

His Tokyo Olympic campaign saw him win the Tokyo test event in a stacked field of Olympic hopefuls, become Canadian national champion, be selected for the Commonwealth Games individual and mixed relay triathlon events, and become the first Canadian to finish on the podium in a World Triathlon Series race.

With Paris 2024 less than three years away, count on him to target gold.

Silver for Mislawchuk in Mexico

Tyler Mislawchuk was looking for a three-peat at the Huatulco World Cup but had to settle for silver in a sprint finish with Spain's Genis Grau.
News Article

The Bahrain Endurance 13 are back to their winning ways, taking three golds and a silver over the weekend.