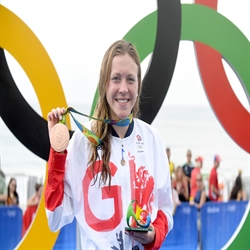 Vicky Holland is the first British woman to capture an Olympic medal in triathlon, outsprinting compatriot Non Stanford for the bronze medal in a thrilling showdown at the Rio Olympics. She  won the 2018 ITU world championship after a stellar season that saw her win three World Triathlon Series races and take the podium in another two after spending the previous year recovering from injury.

Bahrain Endurance 13 is proud to support Vicky as she ramps up her campaign to qualify for Tokyo 2020.

Vincent Luis headlined a fantastic weekend of racing for the Bahrain Endurance 13 team, defending his world title in Hamburg on Saturday.
News Article

It was a Bahrain Endurance 13 sandwich on the podium as Vicky Holland of Great Britain stormed to the win and Ashleigh Gentle of Australia powered into third place at the Mooloolaba World Cup on Saturday.