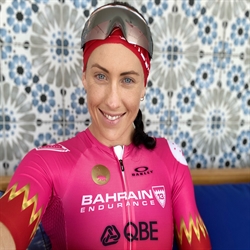 Lauren Parker went from elite triathlete to elite paratriathlete in the span of nine months, one of the fastest transitions to adapted sport ITU has on record. In two years’ time, she had become an Australian world champion in paratriathlon and is now a serious contender to represent the nation at the 2020 Tokyo Olympics.

But then again she has always been a driven and determined athlete.

A junior swimmer who competed at state and national levels in Australia, she began racing triathlons in 2008 and set her sights on Ironman in 2014. After placing second in the 25-29 age group at the 2015 Ironman World Championship, she planned to turn professional. However, weeks before racing the 2017 Ironman Australia, a freak cycling accident broke her spine -- but not her spirit. A year later, she took bronze for Australia at the Commonwealth Games paratriathlon. She also won bronze at the world final on the Gold Coast six weeks after undergoing spinal surgery.

Lauren Parker has opened her 2020 season with a successful title defense at the Devonport Paratriathlon World Cup on Sunday, backing up her win at the Paratriathlon Oceania Championships in Newcastle this past January.