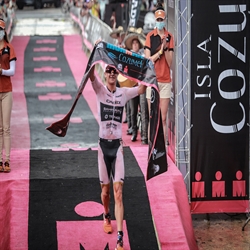 Kristian Blummenfelt wants to win. It shows in how he trains (up to eight hours daily) and how he races: no holds barred, pedal to the metal. Perhaps that’s why he broke the 70.3 world record by five minutes in 2018 at the Ironman 70.3 Middle East Championships -- then bested it by another three minutes the following year.

The Norwegian is rarely outside of the Top 10 racing the World Triathlon Series and believes he can do better than his 13th place at the Rio Olympics. One of the youngest on the Bahrain Endurance 13 roster, expect to see him come into his own in Olympic and 70.3 racing. He has already set his sights on the iron distance with the Pho3nix SUB7 Project, seeking to challenge what is thought humanly possible.

Clean sweep for BE13 in Italy

The Bahrain Endurance 13 scored another winning weekend in Europe, locking out the podium in Italy and taking the crown in Croatia.